ABOUT THE PROGRAM IN MEXICO 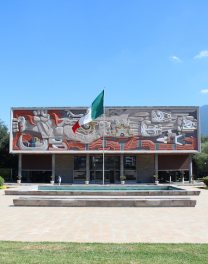 With a desire to provide scholarships in Latin America, the Gallagher Foundation launched our Mexican program in 2004. Mexico not only met all of our criteria for selecting a country but the warm, welcoming culture seemed like the right place to build a community of scholars. From the start, our Scholar community in Mexico welcomes our newest selected Scholars right when they arrive on campus.

In Mexico, all of our Scholars attend Tecnologico de Monterrey (ITESM), Monterrey campus. Inspired by MIT, ITESM was selected as the partner University.  ITESM orients towards technology and has state of the art facilities. The administration led by David Garza at ITESM continues to support our program. To learn more about ITESM, visit their website: www.sistema.itesm.mx

Brenda Jiménez Torres became director of the Mexico program in 2008. Prior to joining the Gallagher Foundation, Brenda graduated from Tecnológico de Monterrey. Following graduation from University, Brenda served as an Organizational Development Executive at Cervecería Cuauhtémoc Moctezuma. Additionally, she founded a Community Service Office for all campuses in Monterrey Tech, and served as the Training Coordinator of Student Affairs with the University.

In parallel with the Gallagher Foundation, Brenda has served as an Institutional Effectiveness Director for high school campuses of Monterrey Tech, as a Student Affairs Director, an Administrative Director, a Career Center Director, GERZA Experiential Training Programs Coordinator, and an Independent consultant in education and training programs.

Brenda enjoys learning from the Gallagher Scholars.  She thrives in helping them with whatever they need to live joyful lives, sharing time with them in a positive and constructive way.

Brenda has been married since 2000 to a great man from Chihuahua, Mexico, Jaime Niels Olivas Rubio. Brenda and Jaime have three children, two alive (Julieta Isabel born in 2003 and Jaime Alejandro in 2006) and one passed away who is waiting for her in heaven. Her children inspire her to treat the Scholars the best she can. From her origins to the family that she has formed, she is grateful to be a believer and practitioner of Catholicism, to love and to respect every life expression, diversity and individualism with social and community awareness.

In her free time, Brenda enjoys learning experiences. Currently, she is on her third year of spiritual exercises with Jesuits - reading and practicing meditation. She survived her first triathlon competition and she is getting ready for a second one. She enjoys running, soccer, having contact with nature and spending time with her family. She collaborates with Treviño Elizondo Foundation, a local Foundation that supports education in the state of Nuevo Leon through scholarships for faculty members in the public educational system.